Moogie, a happy eleven-year old black labrador retriever, came to AWAP 6 weeks after having had her right knee surgically stabilized for a ruptured cranial cruciate ligament with significant joint capsule inflammation and patella tendonitis. Specifically, she had a right TPLO (Tibial Plateau Leveling Osteotomy) with caudal medial meniscectomy in December of 2018.

Moogie presented at AWAP with severe atrophy and decreased strength in her right rear leg, such that she was resistant to bearing her full weight on it, and was overworking the rest of her body to compensate. Although Moogie had resumed gentle 15-minute walks on leash, the muscles of her right thigh after surgery were 8 cm. smaller in girth than those of her left thigh!

Dr. Strubel also noted on her first examination, thickening of Moogie’s stifle joint capsule (her knee) and difficulty feeling her patellar tendon, which suggested a complication called patellar tendonitis (inflammation of the patella tendon) which can happen when there is a lot of tension on this tendon. Moogie’s knee was painful and swollen, causing her to resist exercising and preventing her from fully bearing weight on the leg, even when her opposite leg was lifted. Consequently, her quadriceps muscles, hamstrings, and gluteal muscles were not getting stronger as needed. Her body naturally “turned off” her quadriceps, as a reflex related to pain from her knee injury- which caused these muscles to tighten and contract further, adding to increased tension on her sore tendon. However, we had to get her to use that leg in order to recover!

So Moogie began a weekly regimen, utilizing laser therapy and extracorporeal shockwave treatment (ESWT) to reduce pain and inflammation in her surgical knee (especially the swollen patellar tendon) and to proactively treat her “good” knee for overuse or compensation. After laser or ESWT therapy each week, Moogie walked in the underwater treadmill where the buoyancy provided a low-impact way for her to gradually rebuild strength. With this careful management, Moogie’s patellar tendon gradually became less painful and inflamed. Soon, she was able to take on more therapeutic exercise (on land, in the clinic) while also doing home exercises specifically chosen to target her needs.

As Moogie started getting stronger and using her right leg more reliably, we continued her extracorporeal shockwave treatment (ESWT) to keep her on the move. Specifically, ESWT was key to relieving the swelling of her patella tendon and reducing the tension in Moogie’s quadriceps, so that they could once again be activated and strengthened by use. Without this intervention, exercise presumably would have worsened her methods of compensating, instead of working the muscles she needed to strengthen (as her body protected her quadriceps, rather than engaging them). Moogie also benefited from consistent use of the Assisi Loop (Pulsed Electromagnetic Field therapy) for non-pharmaceutical pain management at home.

Moogie has been a rehab rock star for the past four months of weekly therapy. She loves the affection and attention at her rehab appointments, and eagerly performs her exercises in the gym. She is moving happily, without pain, and using her rear limbs equally. Her right pelvic limb (which had the surgery) has regained strength and muscle mass in the key muscle groups of hamstrings, gluteals and quads - so that she is less likely to injure her ‘good’ leg while compensating. All of this prepared Moogie for a recent road trip with her family, including sibling dog Daisy, which she enjoyed without setbacks! Best of all, Moogie has returned to making therapy visits to places like Stanford Medical Center, where she is finally cleared to walk across the slick tile floors and to climb gently onto the beds of the human patients who need her most. 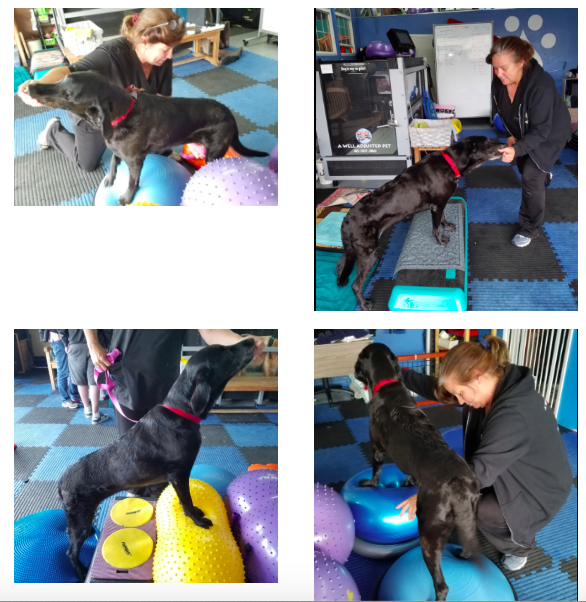